I’m sitting on the deck of my cousin’s home, on the Gaspe  coast of the St. Lawrence Seaway, near Rimouski, watching the relentless movement of the tide – in and out, taking in the smell of the salt sea air, feeling the call of memories and of stories past, present and future.

I’m on a road trip with my dad – to his homeland in Quebec.  He felt the call of coming home and invited me along.  He grew up on the Gaspe coast, his family’s home one one side of the road, the seaway on the other side. Although I also grew up in a coastal community, it is not the same as being right on the sea, being shaped in some unknown way by the tides; and there is no doubt the sea is in my father’s blood.

Having just completed my first memoir: Embracing the Stranger in Me: A Journey to Openheartedness, I am full on in the exploration of how stories shape our lives, what are the stories we focus on and the ones we give life to.  There is some story in my book about my father and his family, a little of what it was like for him to grow up in this place.  I am aware they are told from my perception and interpretation of what he has shared.  He – or members of his family -would probably reflect reflect them quite differently. 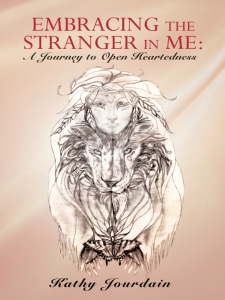 Last night we were joined at the home of my cousin and her husband  by two more cousins (two of her siblings) and my aunt who is almost 90 years old and looks amazing for her age.  She is part of the reason we are here.  Because she called and asked my dad if he would come.  Another aunt, who will visit tomorrow, is another part of the reason.  My father is the last surviving member of his immediate family, his parents and his five siblings all living in spirit now.  My aunts had been married to his brothers.

For two of my cousins, it has been maybe 30 years since I’ve seen them.  For the other cousin, it has been since the death of another cousin – sometime in the last decade.  It surprised me to try to remember how long ago it was.  Time is fleeting in so many ways, it seems as if no time has passed.

I would not have taken this trip on my own.  It would not have even occurred to me.  For some reason Quebec seems far away for me – not geographically but maybe through all the stories I don’t know.  And, yet, being here, all the stories, known and not known, melt away as I find myself lovingly embraced by this part of my family I see so infrequently – and why would it be any different.  I am curious now about what are the stories that are here and now, what are the stories that will emerge late while I sit here by the St. Lawrence Seaway, taking in the salt sea air through all my senses, feeling the call of story in new ways.