St. Cloud is a small city in Minnesota known euphemistically as “White Cloud” because of its reputation as a racist town.  Some residents of this community have decided this is a reputation that needs to shift.  They are taking action in the form of Conversations that Matter.

Mayuli Bales became aware of the Art of Hosting a couple of years ago through one of the early trainings in Minnesota.  She began to dream of what might be possible in her home town and the seeds of the multi-cultural community gathering for conversation began to take shape, seeds just harvested mid-November 2012.

It was the first gathering in St. Cloud about race and culture convened by people of colour.  Mayuli pulled together a local calling team despite not being able to explain clearly what the Art of Hosting is and they got to work, supported by InCommons and the Meadowlark Institute.

Some of the most passionate discussions in the hosting team were about seeing and being seen, having voice that is acknowledged and recognized. The experience of so many people of color is that they are invisible, not seen, not heard. Heartbreaking. For them. For those of us on the hosting team too.  For me.

The dream was to Color the Cloud. The purpose for our gathering co-evolved by the hosting team the day before was:

Discovering together our community, to build the future by:

So much anticipation.  So much hope.  So much anxiety. Could it really happen? The three day design that emerged used the themes in the purpose as themes for each day.  Day 1 was Discovering Community: Seeing and Being Seen.  Day 2 was Building Community: Getting skillful together. Day 3 was Practicing Community: Co-creating the evolving story.  The design included the usual interweave of patterns, practices and teaches. 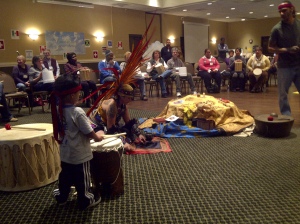 Drummers who opened the community conversations in St. Cloud

We were welcomed into our space by drummers – three members of a family with Aztec heritage, a father, mother and their three year old son who took up his place as a drummer.  The father shared with us, “You’ve been told in school and in your museums that Aztec’s are extinct.  But here we are, my wife, my son and me.  We are not extinct.  Neither is our culture.”  Culture must adapt to survive while cherishing those elements which make the culture distinctive.

He shared with us the story of the drum – as a grandfather, as a heartbeat, as part of community voice with its own message for each of us.  We were all invited to drum.  All of us.  Latinos, Somali’s, Oromo, African Americans, White Americans (and Canadians too) – broad categories of culture which do not do justice to the full multiplicity of culture in the room.  One world where many worlds fit.  Could fit.  Could be invited to fit.

The container was set, to be strengthened over the next few days. The invitation to see.  To see who else is in the room.  Who else cares enough about coloring the cloud to show up – for a morning, an afternoon, a meal, for three days. To be seen.  To contribute voice.  All voices.  Welcoming the languages present to be spoken aloud for all to hear.  Slowly at first but building so that by our check out circle, people were freely speaking their language, interpreted for the English speaking among us to comprehend, to see, to witness.

We became aware, as a hosting team, that these people, showing up day after day, did not need to hear our voices introducing teaches into the room.  They needed to hear each other’s voices, each other’s stories.  In ways and on a scale that had not yet happened in this community.  They needed and wanted to become skillful in practicing conversation with each other.  And to use conversation to support each other in initiatives and projects called out during the proaction café.  So we let the teaches of frameworks go and we focused on processes, ways and means of continually inviting them into conversation with each other.

The story of the new began to emerge during Open Space, Collective Storytelling, World Café, Proaction Café and smaller deep check in circles.  Surveying the small groups at any given time or in any given process, it was easy to see the diversity in each circle.  It was heartwarming.

The first is of a member of our hosting team, a beautiful Somali woman dressed in the full traditional garb of her culture and often in the most brilliant of colours.  At the end of Day 1 she is part of the check out team.  Sensing the energy is low, she has a plan.  She looks down at her dress, begins to pull up the top layer of it, tying it in a knot, exposing the next layer of dress which still goes down to the floor.  Just this is so unexpected she has our full attention.  Then, she invites all of us to imagine with her that we are cats, to get down on the floor moving around on all fours, meowing.  Amidst gales of laughter, all who were able in the room, get down on all fours and move through the room with varying degrees of gracefulness and hilarity.  Be prepared to be surprised!  How many stereotypes did she smash through with this simple gesture of fun and delight?

The second story is of a self-proclaimed native son of St. Cloud, an older and retired white man.  He was asked to share his story in the collective story harvest and, to be honest, I wasn’t sure how it would unfold.  He offered his story, not only as his story, but as the story of his mother and his grandparents too.  Among the people in his group were three young Somali women.  Later in the collective harvest, one of these young women stood up and said, “We are always asked about my culture and what it’s like to live here. I have realized that we don’t stop to ask the people who have always lived here about their culture and what it’s like for them to live here.”

Later, when we reconvened in our full circle, someone pointed out to me that this man was now sitting in the middle of these Somali women.  Still later, when I thanked him for bringing his story to the group, he thanked me for the opportunity.  He told me he had arranged for these women to meet his mother and hear her story directly.  Delight all around.

These are just two small examples of how we the purpose of our gathering gained life and vibrancy.  People were beginning to see each other and to feel seen by each other, to give voice and be heard.  It is a beginning for a town that is coloring the cloud, shifting the shape of its reputation and sending out the message that the future is being co-created by people who care about where they live and about each other. 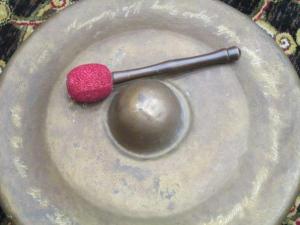