My dad, Hector Jourdain, turned 80 on March 29, 2013. A milestone birthday we weren’t always sure he would reach. A year ago he was barely able to move, couldn’t navigate the stairs in his house and was sleeping on a chair in his family room because of that.  He was in the hospital for a month, fighting an infection, a back so bad he couldn’t stand and the after effects of radiation therapy for prostate cancer – one of the many times he’d been in hospital for extended stays for different reasons over the last few years.

When he was wheeled into a doctor’s appointment because his legs were too weak to support him, his family doctor was sure he was headed for long term care.  The doctor didn’t reckon on my dad’s will to live.  And not just to live, but to live a life that still feels like it has quality to it. 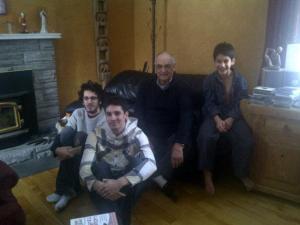 His desire to live a life beyond mere existence prompted him to inquire about an advertised back belt, which prompted me to seek out more information, finding him a better belt.  He took himself to physiotherapy – despite his own scepticism and the scepticism of his doctor and he began a road to recovery that astonished his doctor.  It didn’t astonish me.  I knew once he made the decision to live life that anything was possible.  It is one of the things he teaches me – anything is possible.

There are many things I might not have imagined.  Chief among them was that my mother would experience dementia and that my dad would reverse the traditional husband/wife roles and become her dedicated care giver for so many years before he exhausted himself and her condition became so bad we had to place her in long term care. 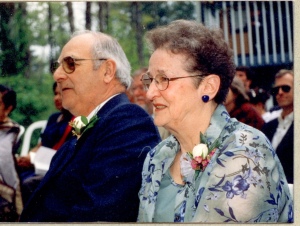 Easter Saturday we celebrated this milestone birthday with friends and family at my dad’s home where he lives alone with his two cats and loads of projects that keep him occupied.  He is building a punt (row boat) in his basement – the second punt he’s built after refurbishing a canoe that had been in his family for years and had been used by his father decades before that to rescue two people off of ice flows in the St. Lawrence Seaway over a Christmas holiday. 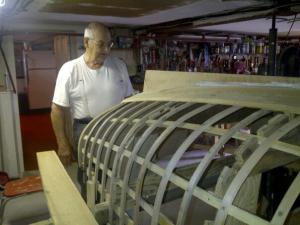 His garage is a workshop where he still putters away at rebuilding engines or creating parts when he feels in the mood to do so.  He has been called a “magician” when it comes to fixing engines and engine parts.  He is renowned for his skill and expertise.  The “hobbies” he has now give him choice. When he feels like it, he has things to keep him occupied, including housework, yard work and fixing meals for himself, continuing to experiment with new recipes. When he doesn’t feel like taking on one of his numerous projects, he can take it as easy as he wishes.

My dad and I have journeyed great distances together – not so much geographically, but spiritually and emotionally for sure.  I always knew we shared a strong connection.  We’ve had our issues over the years.  I know I’ve disappointed him a few times.  Despite those moments, he has always loved me unconditionally.  My friends have always been welcome in my father’s home or on his boat, when I was a child growing up and as an adult. 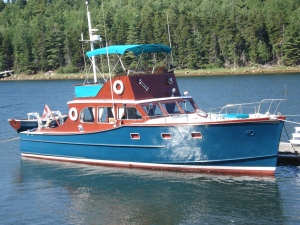 In typical family dynamics, there were times as an adult he could make me feel like a chastised child or cause me to doubt or judge myself – not because he intended to but because of the activation of old patterns sparked by a word or tone.  In my own journey to myself, my journey to open heartedness and embracing the stranger in me, without working specifically on any issues I might have had with my dad, I resolved them to the point that there is no longer anything he says or does where I feel chastised or judged or even guilted.  Our relationship is mature, some give and take, a lot of love and support.  We don’t need to fill the space around us with words all the time.

My father was 45 when he underwent his first open heart surgery.  He has had more health issues than I can remember since that time, mostly in the last half dozen years or so.  And he is in pretty good health, all things considered – not the health of a young man but the reasonably good health of an 80 year old man who has experienced a lot in life.

In some ways, his turning 80 is a bit of a miracle – one I cherish.  He changed the course of my life without me knowing it until just a few years ago.  He and my mom were in the right place at the right time to find me.  It was my father’s friendship with my birth grandfather that created the opportunity for us to become a part of each other’s lives.  Without my father, my life path would have been very different.  Hard to know how different, or where I would be today – maybe somewhere close to where I am, maybe not.  Given that I’m happy with the path I’m on now that continues to unfold in the most delightful of ways, I’m grateful that our paths crossed when I was baby  and grateful to have him in my life now.

10 thoughts on “Celebrating My Father at 80”