Out beyond ideas of wrong-doing and right-doing,

there is a field.
I will meet you there.

Rumi’s words, with a slight variation, encapsulate the experience of an amazingly culturally and age diverse group of participants, apprentices and hosts who gathered September 11-14, 2012 in the middle of the Phillips Community of South Minneapolis where all of us discovered there is a field beyond difference and we are willing to meet each other there. 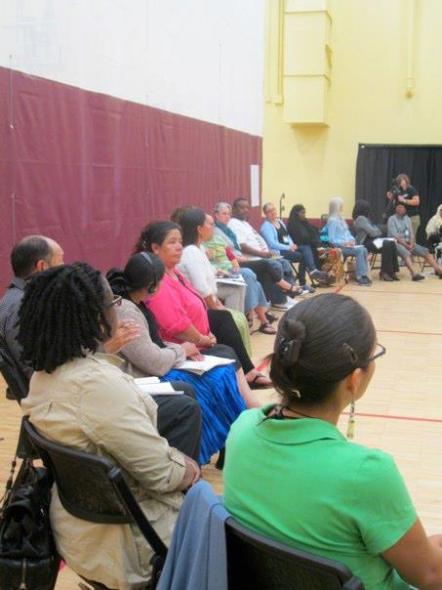 This Art of Hosting training, supported by the Bush Foundation’s InCommons in partnership with the Meadowlark Institute, was called by Amina Saleh a co-founder of the Native American Somali Friendship Committee, in the hopes that bridges could be formed across the  multiplicity of cultures that have come to reside in the Phillips residential area of South Minneapolis.  The original residents of this community were primarily African Americans, Native Americans and Anglo Americans.  In the 1990s immigrants and refugees began moving into the area in search of affordable housing.  Over the years, the cultures clashed, tensions rose and violence across the cultures, particularly between the Native Americans and Somali communities, occurred.

Amina found herself at an Art of Hosting training in March 2012 and became curious about what might be possible if a training was hosted right in the middle of her community, in the community centre, where the children congregate after school.  Well, we found out!

We started with a beautiful Lakota sage ceremony offered by Lemoine Lapointe from our hosting team, to open the space, to cleanse ourselves, open our minds and, even more so, our hearts.  An offering from one of the cultures present in the room, inviting others to also offer in a right moment or opportunity.

Each one of us was then invited to bring our voices into the circle by responding to: my name is…, I live…, I’m from…, my ancestors are from… and I speak …. languages. As we listened, we became aware, beyond the diversity of skin colour already visible in the room, of the richness and multiplicity of cultures and languages represented in the space, the richness that showed up sometimes in a single individual as well as in our field.  It took our breath away and opened our curiosity.

The purpose that emerged for the four day training was: Hosting meaningful conversations as a way of giving life, (1) inviting in our full selves and each other, (2) sharing language and frameworks, (3) staying in it – together and (4) building “whole” community. The phrases in the purpose statement framed each of our four days; scheduled to begin around 9:00 with a hard stop at 3:00, because this is when the children arrived in the community centre we were in and when some of the single moms in attendance also needed to be home to greet their children.

By the third round there was a beautiful buzz in the room as people began to relax into the invitation to bring their full selves.   In the harvest, one man offered, “Unlike Vegas where what happens in Vegas stays in Vegas, what happens in this room should not stay in this room. We all need to take it back out into our communities.”  This became a mantra for participants for our full time together.

People were ready and willing to offer their rituals, ceremonies and stories into our collective space.  In addition to the opening sage ceremony, we experienced a Somali coffee ceremony, an Aztek ceremony and a Hmong ritual and an African American dramatic story telling: Sojourner Truth, in addition to Native American ceremony, song and round dance from the Dakota and Lakota cultures. We gifted each other with prayers and blessings.

Sometimes it was a bit uncomfortable with the varying perspectives and cultural norms around touch, song, dance and partaking in another culture’s ceremony; but only just in that moment before understanding blossomed and more ease entered with the witnessing of things precious.  Graciousness, curiosity and respect filled the space and the conversations. Deepening our individual and collective listening skills invited us all to show up even more fully.

The realization that issues, concerns and passions arc across cultures invited people into bridge building. Education, children, community housing, racism, racial profiling, relationship with police, healing, well being.  Learning to navigate the dominant culture and stand up, both for what is right and for rights of an individual no matter each person’s roots or ancestral history.  Awareness of commonality in the diversity. People care about many of the same things even if their way of approaching them or their cultural norms may be different.

Our work began in the hosting team itself on our prep day.  It was the first time many of us had met in person as is common in these trainings.  There was a great variety of experience and understanding of the Art of Hosting in the team, from lots to little to almost none, with people eager to deepen their skill, grow their capacity.  The team quickly became strong and cohesive with each person stepping in, contributing, supporting as one fluid movement, offering what we each could, asking for what we needed. We formed community.

We became a field to welcome the larger field of community activists and organizers from across cultures who showed up.  And came back. Day after day.  For four days. They sensed something different. Became engaged in possibility in new ways. They made plans for next steps on very specific projects. Co-creating a new hope for the future. Giving life to community from a different place.  Stepping into courage, transcending fear, reaching out, seeing the human face of diversity and knowing that shifting the shape of the communities they live in and touch is possible to ever greater degrees.  Humbled, touched, delighted to be in this work that matters so deeply.

18 thoughts on “The Field Beyond Difference”